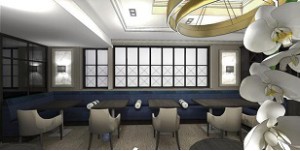 Adam Stokes is one of five Michelin-starred chefs with restaurants in Birmingham. He closed his ‘pop-up’ Adam's Restaurant on Bennetts Hill just before Christmas. He has now unveiled his new restaurant Adams in Waterloo Street, also in central Birmingham.

Adams in Waterloo Street has just opened in a building once the home of the French Bank, Societe Generale. The restaurant has 36 covers plus a private dining room with around 14 covers depending on the layout required.

The private dining room can be used for everything from a breakfast meeting to a presentation.

The new premises will also include a Chef’s Table located within the kitchen environment which will be available to hire exclusively for up to 12 guests from March 2016.

Adams’s Restaurant in Waterloo Street is just off Colmore Row; a two-minute walk from both Birmingham New Street and Birmingham Snow Hill stations.

The other four Michelin-starred chefs based in Birmingham are: Purnell's in Cornwall Street also in the city centre plus Simpsons in Edgbaston, Carters of Moseley and Turners in Harborne.