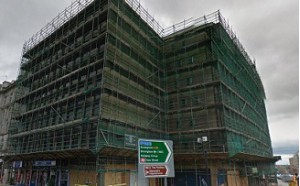 Plans have been published to convert a currently vacant office block in the centre of Birmingham into a 130-bedroom boutique hotel.

Beneficial House is the office block in question. It is a seven-storey building constructed between 1959 and 1962.

Beneficial House has housed a nightclub in the past but has been largely vacant in recent years. It is located on the corner of Suffolk Street and Paradise Circus.

Restaurant and retail units would feature on the ground floor with the hotel bedrooms above.

No hotel operator has been named yet.

Birmingham city council is expected to make a final decision on the plan in the coming months.

The new hotel would be located directly opposite the new £700 million Paradise regeneration project currently under construction in the centre of Birmingham. It is a very short walk from Birmingham New Street station.