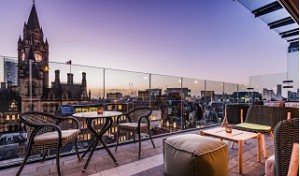 King Street Townhouse in the centre of Manchester has just completed a £40,000 refurbishment which has seen the conversion of its Tavern Restaurant into an "all-day dining destination" featuring a new-look layout, custom-made furniture and luxury soft furnishings.

The hotel has 40 bedrooms as well as a range meeting and events space featuring the sixth floor South Terrace and Lounge accommodating up to 150 guestsplus a rooftop spa with an infinity pool overlooking Manchester Town Hall.