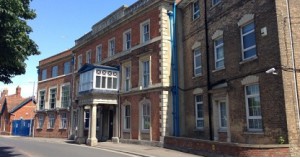 The Old Bridgwater Hospital in Bridgwater, Somerset is set to be converted into a hotel, gym and restaurant complex following its recent sale.

The Old Bridgwater Hospital was built in 1813 and closed in 2014 with its services transferred to a new purpose-built facility in the town.

The site has previously been granted planning permission for an 80-bedroom hotel, gym, swimming pool, day nursery and three homes.

Plans include upgrading the Georgian frontage of the old hospital which would then form the entrance and hotel reception.

A proposed three-storey health club/gym and swimming pool would be located in the former outpatients building with the hotel restaurant on the ground floor of what was the former dental surgery.

The Old Bridgwater Hospital is located in Salmon Parade close to the town centre.