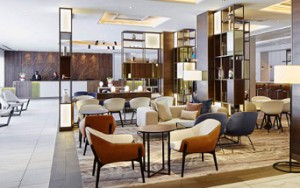 The 304-bedroom hotel is due to complete its bedrooms refurbishment by the end of July 2017. Seven new bedrooms are also being added.

The renovation at London Marriott Hotel Regents Park will include the addition of four meeting rooms to the existing lobby as well as upgrading the hotel’s event technology with remote-control projectors and screens plus an integrated sound and PA system.

The largest event space at London Marriott Hotel Regents Park – the Primrose Hill – is being redesigned to introduce natural daylight as well as a contemporary new design. It will accommodate up to 300 delegates theatre style and will subdivide into three equal-sized self-contained rooms. It reopens in October 2016.