The Titanic Hotel and The Rum Warehouse Liverpool – site visit 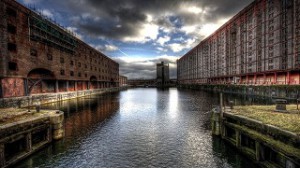 Let’s get one thing straight – there is only one official Titanic Hotel in Liverpool and it is not the one I thought it was. The real authentic Titanic Hotel opened last Saturday (5th July 2014) overlooking Stanley Dock in Liverpool. The Titanic Hotel and The Rum Warehouse is a converted brick-built former bonded warehouse on Liverpool’s dock-front.

The other hotel, which is known locally at ‘The Titanic’, is located in the headquarters of the former White Star Line shipping company, the inventors of the Titanic, and in an altogether more salubrious location facing the Liver Building in the centre of Liverpool. Officially the name of this hotel is 30 James Street and then below and in much smaller lettering is ‘The Home of the Titanic’ – with 64 ‘titanic-themed’ rooms. All very confusing.

Back at the authentic Titanic Hotel. If you like industrial architecture you will love this hotel. You can sit on the hotel terrace and look across Stanley Dock to the Tobacco Warehouse – it’s the largest brick-built warehouse in the world (27 million bricks since you ask) but it’s in a sad state of repair with half its windows broken and shrubs growing out of the walls. Despite it straightened circumstances it is still a fabulous building and a perfect backdrop (especially lit at night) for any event at The Rum Warehouse. The tobacco warehouse is scheduled for a revival in the not too distant future. 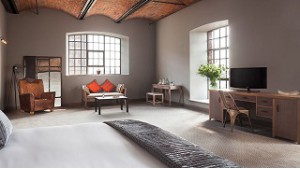 You enter Titanic Hotel off Regent Road (the Dock’s road) between two stone turrets and into a cobbled courtyard which is the car park for around 100 cars. You could be excused for thinking the building was a prison, except prisons in my experience don’t have flower displays at the front door nor do they have glass fronted balconies attached to the cells.

Internally a large bar and restaurant is directly behind reception on the ground floor – a huge open plan space which has been informally partitioned and with a fabulous barrel-vaulted ceiling. It is industrial chic at its very best with the bare brick walls and steel pillars but it has been thoughtfully and stylishly restored. The bedrooms, and there are 153 of them, are large and well equipped with super-size bathrooms and power showers. Majority of the rooms also have barrel-vaulted ceilings and all are fully equipped with the latest ‘must-haves’ including free wi-fi. 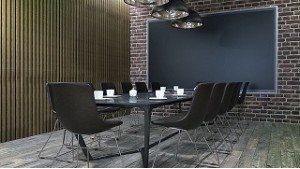 Attached to the Titanic Hotel is The Rum Warehouse. The main feature is a ground floor room with a high ceiling plus floor to ceiling windows down the one wall overlooking Stanley Dock. The room is hugely spacious, fully carpeted and will accommodate up to 1000 delegates for a theatre style meeting. It is equipped with the latest AV and technical support including 100mb broadband throughout and has direct access through two doors into the car park. Alongside the main room is a dedicated reception together with a facsimile of a staircase from the RMS Titanic which leads up to a mezzanine level and further meeting rooms and boardrooms. In total The Rum Warehouse encompasses 1400 sq-mt of conference, exhibition and banqueting space.

Future developments at the Titanic Hotel include a spa.

On the downside although the Titanic Hotel is located in the city centre it is not walking distance from the station. In fact driving or taxi is the only realistic way to arrive – but if you want the space and the style you will have to make a few sacrifices. However the Titanic Hotel and The Rum Warehouse have a ‘wow factor’ which will be hard to beat. Go take a look. I promise you will be impressed.