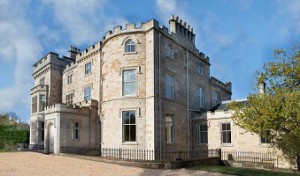 Crossbasket Castle’s features include a grand ballroom overlooking the waterfalls on the River Calder, plus nine individually-styled bedrooms, a drawing room, dining room and library all furnished with 14th, 15th and 16th century pieces from across Scotland.

Each bedroom is decorated in a period style with an over-sized bed alongside original antique furniture - and fully equipped with the latest audio and video technology.

Crossbasket Castle is managed by Inverlochy Castle Management International (ICMI); a company which operates 12 other independent hotels throughout Scotland.

Crossbasket Castle is located in High Blantyre close to East Kilbride and the M80/ M74 motorways. It is an approximate 30 minute drive from Glasgow.