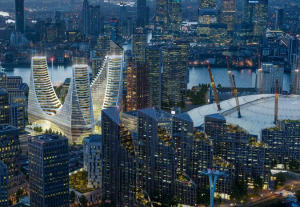 Peninsula Place will be formed of three towers which will house a new hotel as well as offices, apartments plus a revamped North Greenwich Tube and bus station.

The heart of the project, though, is the 24m-tall glazed winter garden with a series of green terraces. This is the scene that will greet those ascending from the Tube.

A 152m-long gallery will form an “urban forest” supporting a movable glass cupola, which unfolds to let in the air and the weather.

Peninsula Place is Calatrava’s first major scheme in London. As an architect he is renowned for his monumental, city-shaping structures.

Peninsula Place has been greeted with a chorus of approval although no dates for its possible development and opening have been published.