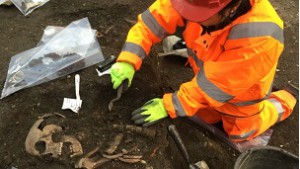 It’s been hailed as one of London’s new tourist attractions, improbable as it may seem. However, if you have a few minutes to spare at the end of a busy day working in London then makes you way to Liverpool Street Station. Spread across an acre of excavated mud, a few hundred yards from one of Britain’s busiest rail terminals lies the former Bedlam burial ground. Archaeologists have started excavating around 3000 skeletons from the new Crossrail station which is currently under construction.

The skeletons have been exposed for the first time since the 17th century. The Bedlam burial ground was in use from 1569 to at least 1738, spanning the start of the British Empire, the Civil War, the Restoration, Shakespeare’s plays, the Great Fire of London and numerous plague outbreaks.

Originally founded in 1247, the Bethlehem Hospital – now known as Bedlam - became notorious in later centuries for its grim treatment of what were inoffensive madmen and dangerous maniacs.

Currently a team of 60 archaeologists are working in shifts, six days a week to remove skeletons and carefully record evidence for what may prove to be, in archaeology terms, London’s most valuable 16th and 17th-century cemetery site. The excavation is being undertaken by MOLA (Museum of London Archaeology) on behalf of Crossrail. As the pit deepens and the emptying of the cemetery opens up earlier layers more treasures may yet lay in wait.

Later this year the site will close as building work will start on a new underground ticket offices for the Crossrail station so get yourself down to Liverpool Street station pronto.  I am told the viewing gallery is open three lunchtimes a week: Wednesday – Friday from 1.00pm – 2.00pm.