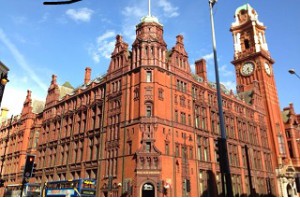 “It’s the Palace Hotel, Jim – but not as we know it” – to misquote the line from Startrek.

I was in reception at the Palace Hotel in the centre of Manchester for a showround to judge for myself the difference a £25million refurbishment can make to a 271-bedroom, four-star hotel.

On the face of it – not much. Reception is as I remembered it.

The internal and hugely impressive internal decorative tiling, always a dominant feature of the Palace Hotel, is still intact but then again it is Grade II-listed. A sculpture of a wooden horse stands centre stage in reception which is a good talking point.

It is when you move across to what used to be the ground floor restaurant you start to notice the changes. 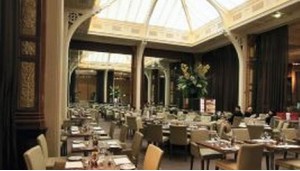 Dividing walls have been demolished and the area has been opened-up and expanded. The former Whitworth Suite, which was a private meeting room alongside the restaurant in the old days, has now been incorporated.

Space at the rear of the former restaurant has also been incorporated.

This has all resulted in a huge ground floor area which subdivides subtlety into distinct areas - each with their own décor, character and ambiance.

At the front overlooking Oxford Road is The Refuge. It is the main hotel bar and restaurant – but it is not your typical hotel bar.

The Refuge is designed to attract the local residents as well as hotel guests and it is a plan which works well. People had just popped in and were sitting reading the morning papers, relaxing, working on-line on their laptops and even ordering drinks.

There was a good atmosphere. The walls in The Refuge which are not already tiled will feature artwork and displays by local artists in future.

The Refuge also includes a private dining area for up to ten guests.

Just behind the main bar is the Winter Garden, a space designed for a relaxing afternoon tea.

At the very rear is The Den with two football tables, a pool table and a large screen television.

The public area at the Palace Hotel is just that – public. The Den however can also be privatised for groups of up to 80 delegates standing.

Once you get to the back of the Palace Hotel the changes manifest themselves thick and fast.

The private road at the rear of the Palace Hotel which used to lead to a small car park has been gated at the Whitworth Street end and blocked at the other. The open-air space now has tables and chairs for al-fresco dining and entertaining.

Future plans for this area include perhaps attracting weekend food and drink markets or farmers markets, again to attract the many local residents who live within a stone’s throw of the Palace Hotel.

On the other side of this road and still on the ground floor is the first new space. It was formerly a casino but now it is the ‘Whitworth’.

The Whitworth is three rooms in one. Combined, the Whitworth will seat up to 450 delegates theatre style. Double-height windows along two walls provide loads of natural daylight. The Whitworth includes a full bar which can be opened or closed as required.

Down on the lower ground floor is the old Ballroom. This is largely unchanged, apart from a facelift. It is still the largest single event space within a hotel in the north of England.

The Ballroom will seat up to 1000 delegates theatre style. It now includes a larger private bar area replacing the previous one which was thought to be too small.

The Palace Hotel boasts a range of 18 event spaces accommodating from ten to a thousand delegates.

The refurbished bedrooms at the Palace Hotel are still very special with their high ceilings and huge windows giving a wonderful sense of airiness.

I suspect the time when most Mancunians will realise there have been changes behind the scenes at the Palace Hotel will be when the large neon ‘Palace’ sign on the tower high above the hotel and a Manchester landmark for years is replaced with the new hotel name ‘Principal’. This will happen in November 2016.

“We want our old Palace back!” they might cry - but if they venture inside they will find a very warm welcome and they will discover that the old Palace has not really gone away.