Another new Hotel planned in Manchester 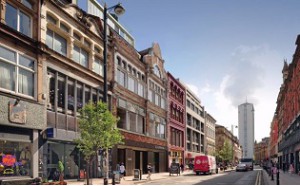 Yet another new hotel is planned in central Manchester.

Owners of Manchester’s Dry Bar have submitted a plan to convert their Oldham Street venue into a 101-bedroom boutique hotel.

The Dry Bar is a well-known Manchester landmark in the city’s Northern Quarter. It was owned by Factory Records and has been an influential part of Manchester’s leisure scene since it first opened at the height of the ‘Madchester movement’ in the late 1980’s.

The ground and basement floors of the building would be reconfigured probably with a new bar replacing the Dry Bar. The existing roof space would be turned into a fifth floor and capped with a new three-storey rooftop extension. The 101 bedrooms would be housed across the upper floors.

No dates have been set yet by Manchester planners to discuss the project.